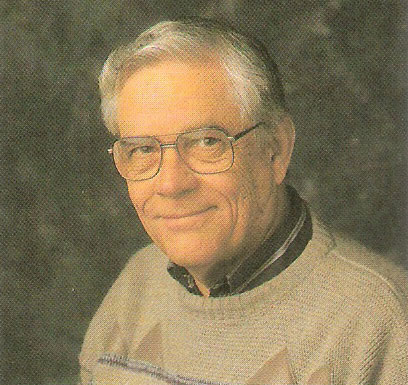 Born in Toronto, James Lumbers' path was charted at an early age. His lifelong dream of becoming a painter, in spite of strong, parental disapproval, was finally realized in 1970. Until that time, James worked in the field of industrial and corporate design,  after graduating from the Ontario College of Art. However, he grew restless and when he had the opportunity to travel with an expedition to the far north, Jim seized the chance to launch his career as a wildlife artist. At last, at the age of 40, he had an outlet for his creative drive.

In the Hudson Bay lowlands and throughout many areas of the sub-arctic , James Lumbers spent a great deal of time with Native people and documented their lifestyles. In the process, he earned what few non-Native people receive, their respect. Evident in all his paintings of this period is a strong, pervading sense of realism resulting from the fact that he had been there. As has been the experience of so many artists before him, the Canadian landscape became Jim's liberator. In honour of his wildlife  work, he was elected a Fellow in the Explorers Club of New York in 1973, His life and work have been documented in Who's Who in American Art. By the late Seventies, James was recognized as one of Canada's foremost realist painters. His work is familiar to the North American public through many solo and group exhibitions, including shows at the Royal Ontario Museum, the McMichael Canadian Art Gallery and the Kennedy Galleries of New York.

His numerous portraits include such distinguished subjects as Sir Edmund Hillary, the late John G . Diefenbaker (1972), Chief Dan George (1973, '83 and '85), as \Yell as a large portrait of the Toronto Symphony Orchestra, with Maestro Andrell Davis (1985). More recently, James has captured [he great Wayne Gretzky ,and the legendary Gordie Howe on canvas as well as Joe Montana of football fame. James' nostalgic renditions, known as the ever poplular series Moments in Time, actually became a  reality in the late Seventies when, as the artist himself says: "I began to search for another challenge. I wanted to tell a story in a painting, to take it beyond the obvious to the illusory and really give people something to look for, "In retrospect, it's hard to  believe it just happened! I was sketching an abandoned cottage in Georgian Bay back in 1976. On a later trip that fall, while poking about the ruins, I found the remains of an old diary and a few musty negatives that were tucked inside. When developed  months later, the photos revealed a family relaxing in 1913 on the cottage porch, sitting precisely where I had sat sketching. The angle of the photograph matched my completed painting exactly. So, more on a whim than anything else, I decided to include these 'ghosts' in my painting and aptly called it Memories of a Summer Day."

Today, James Lumbers has won universal acclaim because there is so much of the human experience in his work. His paintings are virtual sell-outs in print form soon after each release. After experimenting with various media, James prefers to use  acrylics almost exclusively.

For an artist like James Lumbers, the past is his greatest teacher. He recently stated: "We are our memories. We must fight to preserve our heritage and our landscape ... time changes most things, but it is important that we all realize that what binds one  generation to the next is memory - and that's why I paint."

James Lumbers is also a humanitarian, saying: "It's a nice feeling to be able to give a little back when and where I can." Now a foster parent, he has made major contributions to various charitable organizations such as UNICEF, the Juvenile Diabetes  Foundation International and, most recently, Big Sisters. For remembering and honouring past values depicted so poignantly in his work, James Lumbers was named an Honorary Chief of Police (or Metropolitan Toronto on November 18, 1993. He is also i1n Honorary Inspector with the Ontario Provincial Police.

Through national radio shows, television, major newspapers and magazines, the name 'Lumbers' is quickly becoming a household word across North America. Jim's work can be found in private collections and galleries in Japan, Hong Kong,  Scandinavia, Russia, the United Kingdom and throughout Europe. Documentaries on PBS and several cable networks in Canada make it possible for the public to actually see the artist at work.

Moments in Time, a large volume on Jim's life and works, was published in the spring of 1995.

Today, heritage and nature surround the artist's world. In spite of the demands of public appearances, Jim still spends as much time as he can at his retreat by Georgian Bay, where he creates the images that are close to his heart. 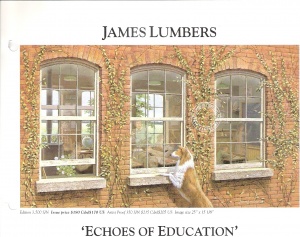 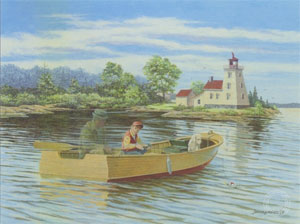 The Spirit Of Fishing 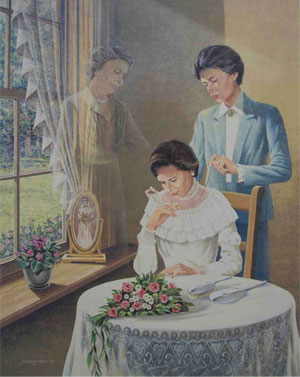 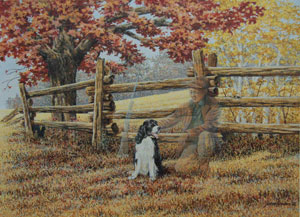 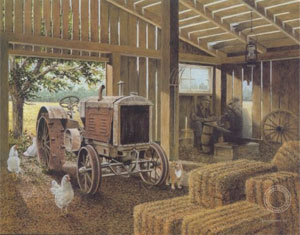 A Game Of Checkers 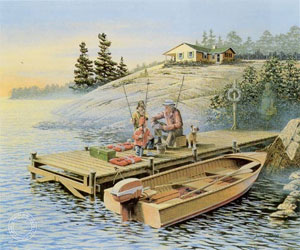